I probably won’t stop apologizing for not being with you every week. Well this time I blame Christmas, we spent more than 2 weeks in Poland, so no trips around the Czech Republic back then and later we returned to Brno and plunged into work.

But finally last weekend we were 50 km from Brno exploring Buchlovske Mountains as well as the ski area in Stupava, which is a small slope with two 350 meters long lifts, one 170 meters long lift and a kid’s lift. They can take up to 2500 people per hour, which is not much comparing to Austrian or Switzerland ski resorts, but enough no to wait in horribly long queues. There’re two red tracks and a blue one on top of the hill.

If you feel hungry or exhausted you can eat a proper meal and recover strength in a restaurant Akvarko on the other side of the street or go for a fast food at the booth next to the ticket office.

A week ago Stupava slope was easily recognizable as it was the only mountain covered with snow nearby. Interestingly the snow cover, even though it was technical, was the highest in neighbourhood. According to the website there’s as much as 100 cm of snow, which at that time was even more than in Beskids or Jesenik mountains.
Since yesterday the conditions in other ski resorts might have noticeably improve, nevertheless where else will you find a slope that close from Brno? Last year I was writing about Olesnice and Dalecin ski areas, which are also not by a great distance, but here the route is a way easier. Go to D1 in directions to Vyskov, then turn to Slavkov u Brna, go through Bucovice all the time on route no. 50. And then turn right to Stupava.
Just because the daylight ends, doesn’t mean the ride and fun does. Lighting allows the evening skiing as well. Stupava is open from 8.30 a.m. till 8.30 p.m every day except Friday when it’s open till 9 p.m. Even skiers and snowboarders living in Brno can go to Stupava after work for 2 or 3 hour ride.

Unfortunately I couldn’t test it personally because of my “condition”, but everyone looked cheerful and delighted. The hill seemed a bit steep though, but as they say: where you stand depends on where you sit. Even the very small kids rode with a smile of their faces, so it couldn’t have been that horrible.
For people, who like me cannot ski or snowboard this season I recommend hiking nearby Chriby highlands. You can travel the length and breadth of Chriby hills as they are loaded with hiking and cycle paths all around. From Korycany and the ruins of Cimburk castle to Kostelany western city, from Strilky and another ruins of castle to Buchlovice chateau. Unfortunately, at this time of the year most of the attractions are closed and can be viewed only from the outside. Late spring and summer are probably the best season to visit Chriby highlands. First of all you can derive from beech forests, one of the healthiest in the Czech Republic, second of all you can explore mystical castles, picturesque viewpoints like Brdo observation tower or impressive rock formations.

We’ve decided to take a 10 kilometer walk from Stupava to Kazatelna through 553 meter high hill Ocasek and back to Stupava. We parked at the ski area and move on concrete road in south-west directions, along the road goes also the cycle paths 473 and 5150 to Cimburk castle. At the “Nad Prehradou” we started following the green hiking path, which we changed to a red one at “U Misy studanka”. The red trail leaded us to Kazatelna, an 8 meter high unique and outstanding rock formation, which since 1967 is protected as a natural monument. The upper part of the rock was changed by human, steps were carved for an easier climb. It is said that the rock was used as a pulpit by Archbishop Methodius is 9th century, later by St. Clement’s from Augustinian monastery. In 1972 a cross was put on top of the pulpit. Climbing seemed a bit scary at first, but surrounding view set my mind at rest. We followed the red path until “Pod Ocaskem” and turned to green trail again. Before the mark “U hrobu” we turned left to unmarked path that leaded back to Stupava. We could have also followed the green path until we would reach Stare Hute and then returned back to Stupava from the other side, but it would make few kilometers more.

Chriby, Buchlov castle and Brdo view point seemed to be very interesting places to see in summer, so see you soon in few months. 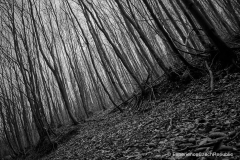 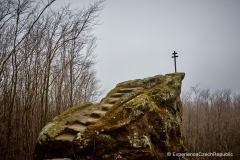 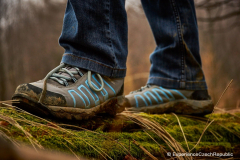 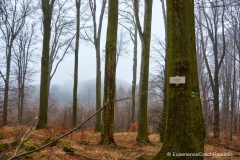 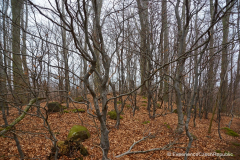 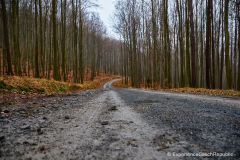 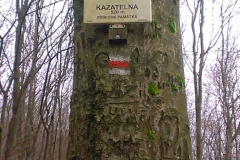 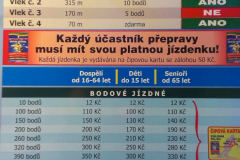