Vysocina as a region is diverse. It’s memorable with UNESCO places like Telc or Zdar nad Sazavou, adventurous with Zdarske Vrchy and sporty with Nove Mesto na Morave or Ski areal Fajtuv Kopec.

We got to know a small part of it again, its peaceful site by the Vir reservoir.

HIKE AS WE DIDN’T HAVE BEFORE

After few kilometres of muddy and slippery forest paths we arrived by the dam to see the 390 meter long and 76,5-meter-high dam.  The view was impressive, but we couldn’t stay long as another several kilometres were ahead us. From the dam we followed the cycle path 5218 in direction to Karasinsky potok. This is a concrete path by the Vir reservoir with several viewing points. All of a sudden you forget, you’re not even in the middle of the way, that kids are moaning and you have to get back to your 9 to 5 job the next day. This view causes internal harmony. It allows to forget about stress and current exhaustion. And most of all it produces all stages of happiness in your body.  This track also leads to the main landmark: the Chudobin pine, a 350 years old tree, that won the contest: Tree of the year. Allowing ourself to spend by the tree more time that we should we had to head back.

As long as the sign directing back to Karasin appeared we knew it will be tough. 2 kilometers uphill through the muddy forest again. The final few hundred meters were a matter of full resignation, but because I was with my kid, I had to set up an example. Running out of strength I helped my 5-year-old daughter with her bike carrying it at my back or pushing her throughout the way. The total distance summed up to 11.2 kilometre, which was way over our limit. Satisfied, but worn out, we packed ourselves back to the car and went home.

The construction of the dam begun in 1947, and back in 1958 it was fully operational. There’re several reasons behind building the dam over the Svratka river. First of all, to regulate the flow of the river. Second off all for water supply purpose. And third of all to catch the flood if necessary. These days the Vir water reservoir is a 223.5 ha huge lake. Because it serves as a drinking water to surrounding regions, it may not be used to recreational purposes like swimming or fishing. Still,we’re lucky we can admire the beauty of this locality.

The most beautiful tree of the year

The famous tree that won the competition is a dominant feature of the landscape. It grows on a sharp, rocky outcrop overlooking the river. It’s named after the village Chudobin, that was sacrificed in favour of the construction of a reservoir. We were definitely not the only ones to admire how the Chudobin pine has grown in size and fame over the centuries. It shows how resistant to the vagaries of the climate and human activity nature can be.

Practical info as of November 2020 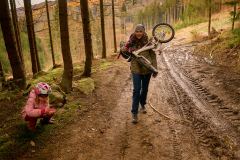 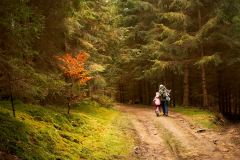 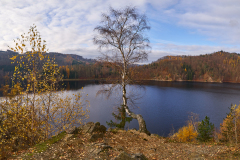 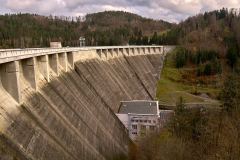 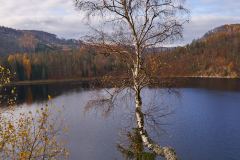 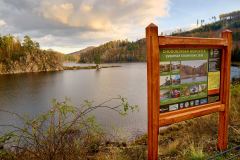 The most surprising trip SO FAR – Namest nad Oslavou