This is a kind of path where you won’t find this peace and tranquillity as you may be used to on a hiking tour in the forest. This track is made for families with kids, and consequently expect screaming, loud laugh and running little dwarfs.

Yellow track is filled with information about forest given in a very straightforward way through pictures and games. Even though the path is not long, it may take the little ones some time to get on top. All the stations grab attention, twice of course.

From more than 400 metres above sea level you can admire astonishing views for each side of the globe. All you need to do is to step 133 steps. There’re actually two balconies, the first one for more frightened folks is located on 3,2 metres high. The other one, on the other hand is situated on height 21,9 meters.  But the real fun starts at 29,3 meters, and this is the highest you can go.  You can also find useful info there; stone boards will show you what’re you looking at.

I found it really interesting that architect put names of all those people who contributed somehow to the tower’s building, which was reconstructed in 2003. People’s names were placed on bricks from which the tower was built.

Tisnov itself isn’t much of a sight. With everything being closed these days, it’s a bit of a ghost town, but the villa street on the way to the city centre catches the eye.

It’s about 25 kilometres north-west from Brno. Road to Tisnov is quite simple, just head Brno-Ivanovice and Kurim, then Tisnov if you go by car. There’s also a straight train connection between Brno and Tisnov. You can get to main train station within just 30 minutes. 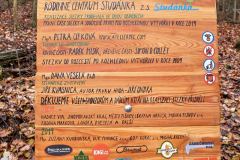 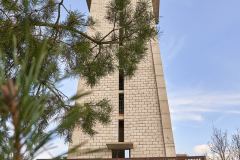