My first solitary trip that I am very proud of. I actually spent a quality time with …myself, wandering through forest, listening to squeaking trees and sounds of the nature. I had time to dwell on the past, think about present and plan the future. I’m definitely going to repeat that sometime in the near future.

The place I planned to visit is an observation tower, this time in Veselice, on so called Podvrsi hill. I decided to get to Blansko by train and then follow on foot several kilometres on a blue trail. If you don’t feel like walking you can get into one of the buses in Blansko(number 223 and 233) get as far as to Oburka, then just follow 2 or 3 kilometres. As always the easiest possible way is to get there by car, head to Blansko, pass the main bus station and at the roundabout direct at Sloup and then go around 9 km to Blansko-Techov and Vavrinec , Veselice is a part of Vavrinec. If you take a careful look at the neighbourhood you’ll notice the tower from your car. The parking spot is situated just several hundred metres from the tower.

My little adventure started in Blansko, where I was standing in front of main station looking for a blue  trail, which actually  should be there as it was suggested on the Observation tower’s webpage. But here I was standing with no map and no signs of a blue trail. Here comes my advice, always have a map with yourself, no matter how well you know the city. I’ve been to Blansko several times and I’ve never noticed that there’re only green trials directing to places like Sloup or different caves. But because I’ve already been to Veselice observation tower before, I knew I had to move toward the city centre until I reach the chateaux. The blue trail was visible as soon as  I reached Dvorska street, then I followed it all the way to the small lake at the outskirts of the city and moved straight to forest.

The whole area of Moravian Karst is gorgeous with its rock formations and the greenest forests I’ve ever seen, and this path was no different. I walked along the brook, passed charming places, where one could seek inspiration, stopped for a while just to take a breath and take a photo. It took me a while, because there were many lovely and marvellous  spots I wanted to show you.

Comparing to trails around Skalny Mlyn and caves, this path wasn’t very popular, only few people passed me by. So if you’re fond of let’s say desolated places, that’s a perfect match. The tour took me about 2-3 hours in one way. It’s about 7 km’s. It seemed as if it was all the way up from Blansko. I kept to the blue trail until the very end of my trip. Bear in mind that blue trail directs to Oburka at the beginning, not Veselice. But once you reach village, you’ll see sign directing to Veselice observation tower (rozhledna in Czech language). There’re few restaurants you can visit on your way. One is at the observation tower, actually the restaurant in behind the tower if you go from Blansko city. The other is 1,5 km from the tower, there’re also some pubs at the lake and of course some in the city.

Honestly, I didn’t feel like I was absolutely delighted with the view from the tower, it was nice but definitely didn’t swept off feet. I was more pleased with beautiful landscapes on the way. It was quite interesting though that from 621 meters above sea level with good visibility it’s possible to see a mountain Kralicky Sneznik in Eastern Sudetes or observation tower Babi Lom in Lelekovice. And everything that if you climb 168 steep stairs. 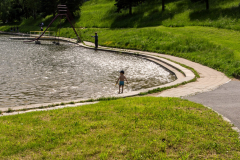 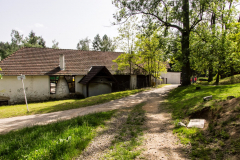 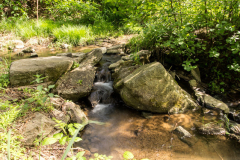 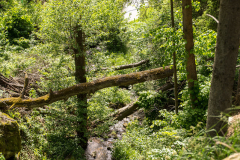 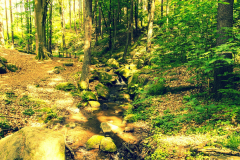 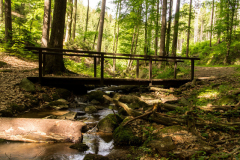 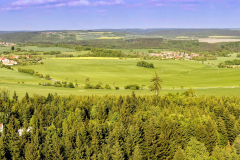