Brno is loaded with bike paths. The longest around Brno called Brnenska Podkova is my aim. One day I will ride that 50+ kilometers. For now I chose just a part of it.

I decided to go on a bike, a few hour “expedition” and here I started my adventure in Reckovice district. There is a bicycle path number 5231 several hundred meters behind my house. Signs directing to different destinations are dotted around quite often, so it’s rather impossible to sidetrack. But before you get to the signs you should find a little bridge above the highway to Svitavy, then go along the railway track. You can also ride on Banskobystricka street, the one where tram 1 goes, and turn right on Vazneho street as soon as you reach the terminus. Then the signs should direct you.

The bicycle path goes through Mokra Hora, a residential district, then it’s possible to admire people’s garden located almost in the forest, to which I run afterward. I took left once I reach a pond, there’re also directions on the post. I headed towards Vranov on the red track, but before that Lelekovice city and the uphill road to Babi Lom waited for me. After tedious 2 kilometers, I turned right to Vranov, it’s only a few kilometers more to overcome.  On the left side, however, there’s a road to Babi Lom observation Tower I wrote about in January. The first 16 kilometres were tremendously difficult, as the road led up, the maximum attitude I reached was 579 meters above sea level. But those views….

Then it was only better, downhill was absolutely fantastic, exactly as it should be: fast and perilous. From Vranov I searched for the way back to Mokra Hora and I found it. First I followed Brezina street, a huge sign Brno might be a hint, after several hundred meters I passed the cemetery on my left side and went down the street to Brno-Utechov district. Don’t Overspeed here, because right behind the bus station is a blue path I followed and you should do it as well if you wish to end this trip with not more than 30 km on the meter. In order to get there, I turned right and follow the path. I stopped for a moment at stud, watched horses, took some photos, and marvel at ambient nature. I couldn’t believe I am just few kilometers from my house, this vicinity is just amazing. You’ll drive out from the forest and find yourself at the same pond you’ve been few hours before. Now, the way back is probably known to you.

To be honest, this tour was more demanding than I originally thought, but it’s definitely worth it. I felt that I was alive…at the moment of course, however, once I got back home I wasn’t able to move my fingers.

An interesting alternative might also be the beer bicycle path Petra Bezruce, which starts in Reckovice part of the city and ends in Cerna Hora, a city famous for its brewery. From Reckovice to Vranov it merges with bicycle path 5231, but then you need to take other direction-in this case: Sebrov, Bukovec and go on to Cerna Hora. It’s 26,8 km to get there. Unfortunately, the train does not go to Cerna Hora, so you need to either save your strength for the way back, stay at the brewery hotel or drive to the closest train station in Rajec-Jestrebi remoted 6 km from Cerna Hora, jump the train, and safely return home. I haven’t tried it out yet, but when I do I will share it with you… 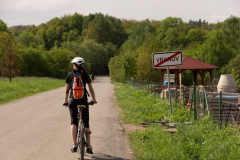 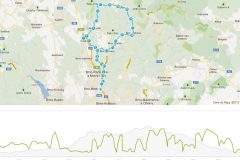 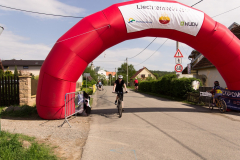 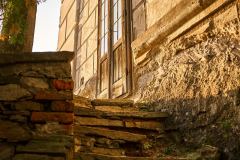 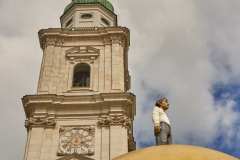