Kroměříž and its famous Flower Garden

Kroměříž is a small city remote 70 kilometers east from Brno.

Route is really simple, you just need to get to the D1 highway in direction to Vyskov and then to Kromeriz. It takes not more than an hour to get there by car and an hour and half by train. Once you get there, there will be signs directing to the main point in the city such as the Flower Garden, Chateau or the city centre. Parking in the city centre is chargeable, but we found a place in front of the tennis club and close to the Bishop’s Mint House (Chobot street, Na Sladovnach street) that was free of charge.

a bit of history

Kroměříž with its 30 000 inhabitants is situated along the Morava river. The original settlement became a city in 1260. Its history is closely related with the dwelling of the Olomouc bishops, who used Kromeriż Chateau as summer residence.

I think most people visit Kromeriz mainly because of its beautiful and trimmed gardens. There’re only two in fact, but they are the ones that attract people.

We started with the Chateau Garden, which is only a 2 minute walk from the main square called “Velke Namesti”.When I walked in through the gates I was startled when I saw so many animals in it. I didn’t expect peacocks walking freely, monkeys in cages or corral filled with dear or different kinds of pigeons. I though this garden will be as usual, huge, green park at the back of the Chateau, but it was different.

Since the establishment in 1509, it changed its look several times. It was a vegetable and fruit garden in 17thcentury, then a baroque garden, then in 19th century it was rebuilt into a stylish landscape park as we see it today with more than 200 kinds of trees from Europe, America and Asia. There’re creeks and ponds that goes through the park, which is the reason there’re so many lovely and admirable bridges. The area is really vast, about 46 ha, so if someone is not in the mood for walking, it is possible to hop on a mini bus for a guided 40 minute tour.

Everything in Kromeriz is within foot distance. Chateau with observation tower and Archbishopric Mass Winery, town hall, main square, Bishop’s mint house or baroque church of St. John the Baptist. From Chateau through the Pilarova street to the Flower Garden leads UNESCO path, which goes through important places in Kromeriż. On its ways there’s the Moric Church situated on Stojan’s square, Academy of Justice built in Neo-renaissance style situated on Masaryk’s square or a XIX century corner building of grammar school. Even the second garden, which on the city map looks as it was far away from the city is only about 10-15 minute away on foot.

flower garden – the most famous in Kromeriz

Flower Garden, mentioned earlier was founded in 1665 as an axial garden, built on an elongated rectangle. Inside there’re labyrinths made of geometrically trimmed bushes, 3 to 4 meters high bushes that look like walls or colorful French style flower compositions. There’re also two buildings: Rotunda with rare Foucault’s pendulum demonstrating the Earth rotation and 244-metre-long colonnade, where you can climb and admire the breathtaking view on the garden. The entrance to the Flower Garden starts from 110 kc for a not commented guide. The part with stunning, brimful with colors and shades flower compositions makes quite an impression. It looks the same way as I imagined it. I suggest visiting Kromeriz during late spring, summer or early autumn, when hues are the best. I wouldn’t go there during winter, because the garden wouldn’t have its charm.

During our visit in Kromeriż, we indulged ourselves in delicious dinner served in one of many restaurants on the main square. Everyone will find something that suits best among vegetarian restaurant, pizzerias or traditional Czech restaurants. We ended up in a restaurant serving classical Czech cuisine, CENTRAL. Name not very visible at first sight, but food was palatable and served quickly.

If you have more time or want to spend a weekend getaway Zlin with its Zoo and Lesna chateau are really closeby. 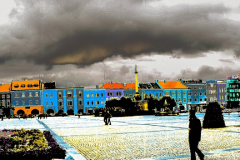 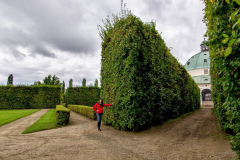 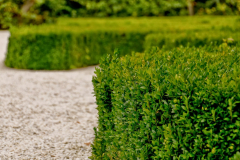 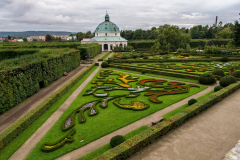 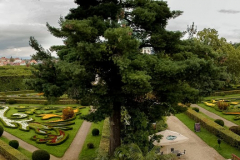 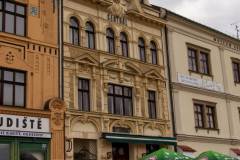 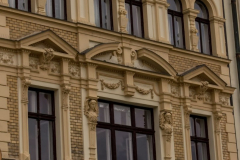 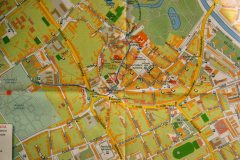