Top attraction for a weekend

Szklarska Poręba is one of the cities connected with the Legends of the Giant Mountains Ghost. It’s located at the foot of Giant Mountains (Karkonosze) and Izerskie Mountains. The city itself is nothing spectacular, but it’s its surroundings that will soak you in.

We’ve barely spent 15 minutes in the center, just passing by. We’ve visited the Tourist Information Center, grabbed some fliers, leaflets and free guides and bought the small folder with a game for kids (more later). The city, anyway, is crowded and does not provide any attractions. It’s spotted with souvenir shops and restaurants.

IN THE SEARCH FOR THE SPIRIT OF GIANT MOUNTAINS

The game I mentioned before is dedicated to encourage kids to discover different spots around Szklarska Poreba in a fun way. Once bought in the TIC, kids get a small blank note, crayon, map, and a handbook filled with information about 17 spots they’re about to visit. Their task is to first find the spot described in the guide, find the huge rock with a symbol on it, and trace the symbol on a piece of paper. With all 17 symbols, they get back to TIC for a small reward. Please note that it’s almost impossible to be at all 17 places in one day. The distance between them is big, they’re not within foot distance. The best option, according to the brochure, is to split the routes for 3 days. They have an itinerary trip for each day. We didn’t have 3 days in Szklarska Poreba, therefore unfortunately we didn’t make it. But after all, it’s not about getting the reward and rushing from one place to another, but it’s about spending time out, in nature and enjoying it.

Price for the folder: 20 PLN (just in Polish)

So let’s start with some of the amazing spots you can visit around Szklarska Poręba.

It’s a traditional glasswork manufactory that opened in 1989. The owner Henryk Łubkowski uses the old tradition of glass work. Here in Leśna Huta, they do mainly garden decorations sold in the Netherlands, but also everything you can find in the shop. You definitely need to go inside, first to admire all the amazing glass crafts, but secondly to know more about the tradition and process of making glass figures. Unfortunately, the workshops and the demonstrations themselves are held in Polish only, but seeing that art is amazing on its own.

It’s the seat of Walloons – heirs of medieval masters in the work of extracting and processing natural resources, iron ore, metals, precious stones, and quartz. Today it’s a museum of cheap wines bottles and a place, where you can buy stones, necklaces, and jewelery and trinkets in general. In front of the cottage house, you can also grab something to eat. There’s a small bistro with a seating place and a playground for kids. It’s a good place for a rest.

The viewing platform on 585 meters above ground with a panorama view of the Giant Mountains. Not without the reason, it’s called golden – it’s one of the most mesmerizing views in the “neighborhood”. Since 2020 the spot has been modernized. Wooden platform, new railing and benches were addded. The easiest and the fastest route to the golden view leads from the Parking spot on Jeleniogórska street, the cycle route Artystyczna.

It’s the second biggest waterfall in the Giant Mountains. It’s 13,3 meters high. It lays on the grounds of the national park and therefore the entrance is chargeable. Next to the waterfall, you may find a mountain shelter, where you can buy a warm dishes and a souvenir shop.

It’s not only a deadly curve, but also another viewing spot. Not as beautiful as the golden view, but still worth going there. The name is becauese of the 180 degree curve with many accidents.

It’s the oldest attraction in the city. Back in time, this spot was a place of worship for the Walloons. They were making sacrifices, often bloody, before exploring the terrain. They needed success in searching for natural wealth. These days it’s rather funny spot. The rock formation consists of several granite boulders, with the biggest one on top – 4 meters in diameter. If you climb it, you can wobble it a little. Just balance, safely of course, from one side to the other and see it moving a bit.

It’s the second most famous peak of the Giant Mountains, after Snieżka. It’s 1362 meters above the sea. The reason it’s so popular is the ski and tourist center, working both during winter and summer. There’re several ways to get to Szrenica. Using a lift, from Kamieńczyk waterfall (1 hour – red path), or from Szklarska Poręba (1,5 hours blue path).  Although Szrenica is not a high mountain, you can feel as if you were 2000 meters above the sea in the Alps, which is positively viewed by skiers during the winter season.

30 meters high rock formations laying on the right bank of the Kamienna river. Easy accessible from the parking spot on Mickiewicza street. We’ve followed the path to the Waterfall Kamieńczyk from here.

One of the most beautiful spots in the Giant Mountains. The 27-meter-high waterfall can be viewed from the gorge. This is an attraction that we need to pay for and during peak season stay in a pretty long line. The path leading to the waterfall (from the lower parking) is a bit demanding, but if you’re not able to walk around 1,5 kilometers up, there’s a minibus that can take you from the parking. Narnia was filmed by this waterfall.

No, it’s definitely not. Szklarska Poręba is full of surprises, and what we’ve seen should not limit you! There’re 17 attractions in total suggested by the TIC, but it doesn’t matter there aren’t many more. Among those 17 spots, we’ve also seen the Norwegian Valley, Black Stone or Skałki Karczmarza, but I don’t think it was interesting enough to write about it.

The first day was pretty intense. It took us around 6 hours and around 13 kilometers in total to visit those 8 spots. We finished the day with a late dinner at Willa Poręba, which is close to Museum Juna. We had a ride on our way back, there’s also a bus station close by. The kids were exhausted and didn’t want to continue walking, even though it was “only”4 kilometers back to the hotel.

This time we drove a car from place to place to speed up the tracing system. The part of the path we did on foot was from Krucze skały to Waterfall kamieńczyk and it took us around 3-4 hours, even though it was only around 4 kilometers.

Unfortunately, we still didn’t trace all 17 symbols needed to complete the activity. Here’s the full list of all 17 spots with the division for 3 days as recommended by the TIC:

We stayed in the Radisson Blu Hotel, which was within walking distance from the center. The hotel is situated up on the hill with a beautiful view of the surrounding nature. It has a pool, whirlpool and different saunas included in the price. Not to mention delicious breakfast. The price is around 90 euros per night for a standard room.

The Norwegian Village, which is also a hotel compex looks amazing as well, and after my recent visit in Oslo, I need to admit it’s similar.

But possibilities are endless, try searching for your dream spot.

I hope you’ll enjoy your visit to Szklarska Poręba and its surroundings.

Let me know in the comment section below how you liked it. 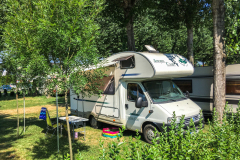