It’s been a while since I last posted anything. I just got a new job and my day plan changed a bit. I need to go on track again, but it’s been so damn cold lately that I wasn’t even in the mood of going outside anywhere far than my usual way: home->work, work->home. I know it’s a lame excuse, still better than nothing. To be honest I can’t wait for spring, I miss the sun and greenery.

In the meantime, during one still “white” weekend, we went on the very last snowboarding trip this year. Our destination was Horni Becva in Beskids, east from Brno, quite close to Slovakia borders. There were plenty of us going on a trip, therefore renting a house for a weekend was a better option. House we were located in was spacious, modern and well equipped. Even bottle-opener was there, which was quite a surprise for me, someone who prefers to choose a low budget accommodation during holidays/trips etc, preferably campsite. This house was luxurious comparing to other places I’ve slept in. At this point many thanks to my fiancée’s friends who organized everything. Resort’s webpage for all of you interested in details.

This location is not only good for winter season but also during spring or summer there’re plenty of activities to do. I’ve noticed some bicycle paths on the way, heritage park nearby and many observation towers over there.

But our aim is simple…master snowboarding. Greg and I are still at a learning phase and Pustevny Ski Areal is a really good place for people like us, scared but willing to get more experience… All together there’re about 3 kilometres of ski lifts taking 4500 people per hour. Nothing to compare to Austria’s ski resorts but I enjoyed my time spent there. We parked at the upper parking slot as I was told…at the very beginning I was quite lost, but I came to my senses after a while. From my point of view Pustevny is adjusted to beginners, there are 4 blue down-hill runs, 3 red and 1 black. I didn’t really feel up to go to a red run after seeing it and I didn’t even want to imagine how a black one looks like there.
Blue run called Knizeci cest is the longest there, it has 5 kilometers, somewhere on halfway it leads to red run Velka Sjezadovka and blue run Nad Boudou. Everything is marked perfectly so there is no need to worry of being lost in the forest. Whole two days we were “training” on blue run Nad Budou. Amazingly I wasn’t bored with that, the opposite I didn’t have enough of it….The only disadvantage of the whole resort is that it is not lightened after dusk, therefore it’s opened only until 4 o’clock p.m.

The variety of tickets allows to choose between all day ticket and hourly tickets. Because we got up late on Saturday we bought 12:00-16:00 ticket for 280 kc. I had enough stamina to stay longer, but 4 hours were quite satisfactory. On Sunday we bought single tickets on every lift because it was cheaper than day pass. Single ride cost 15 crowns at Nad Budou and 20 crown at Velka Sjazdovka. I don’t suggest it will be cheaper for you as well, but because we stayed on the blue run only it was more economical.

Besides good skiing condition, weather and views were astonishing. Especially when we managed to get on 1098 meters below sea level. Pines and spruces bended under snow’s weight, benches covered with ice and a great atmosphere at snack bar serving goulash and other warming soups. Just perfect!

Thank you very much… 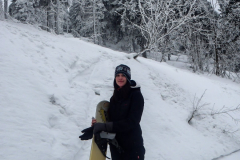