We spent the last day of our trip climbing from one viewing point to another, hiking not more than 14 kilometers, admiring breathtaking panoramas and taking as much of those memories as we can with ourselves.

We started in Mezni Louka, took bus to Jetrichovice (bus station: Jetřichovice, ObÚ) and follow the red trail, which goes through Mariina’s Rock, Vileminina’ Wall, Purkarticky forest and Rudolf’s Stone next through Ceska Silnice, Saunstejn castle and Small Pravcicka Gate back to Mezni Louka. There’s also a shorter version – for those who choose it, the hike will end right after climbing the Rudolf Stone. Follow the red path until you reach a crossroad-then follow green path back to Jetrichovice.

Don’t be mistaken by the short distance. Even though it is 14 or 7 kilometers only, reserve a whole day for it. Climbing the viewpoints is not only strenuous but also time consuming. Count at least 30 to 45 minutes more for each. We started at 9 a.m. o’clock and finished around 5 p.m., while the sole hiking-more than 30 thousand steps took us “only” 4 hours. In case you have enough time, I strongly recommend visiting all the points I mentioned above. Every and each of them carry out new sensation and feeling. Every and each have different ascent and unique panorama on the surrounding uplands. Finally every and each tell different story about its origin.

At the end of the day I felt knackered but satisfied and full of memories about Bohemian Switzerland.

If I have a chance I will definitely want to come back to Bohemian Switzerland and explore places I didn’t manage to visit within those 4 days. I’m pretty sure there’s much more to see than the most visited spots here. 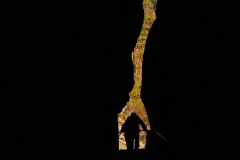 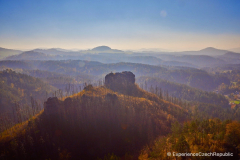 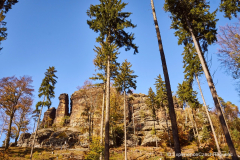 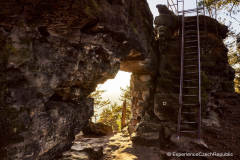