Hiking to the observation point Belveder was one of the most captivating and adventurous trip among all we did around Saxon and Bohemian Switzerland.

Once we entered the forest, which compared to common trekking path was completely desolated, we felt like we were trapped in a mystical and other-wordy place. Inside the forest dominated secret and sometimes even dark atmosphere. The further we trekked, the more engrossed we felt. I personally had the impression that we will be eaten by some creatures outside this world. My husband on the other hand appeared like he was pretending to be a character in one of his games following the quest. I rushed my way, he had the time of his life, but after all I must say-the nature was exceptionally beautiful, almost like mankind did not lay a hand over there. Green forest bed so soft and delicate one could lie on it. Various in shape and colour rock formations. High and strong trees. This is what a call a place, where you can run away form city’s turmoil and forget about all the problems of mundane life.

I wish we could stay there longer, however because we set off a bit too late we had to hurry before twilight. We combined the trip to Pravcicka gate with Belveder. As soon as we got to Hrensko, we took a lunch break and tramp to Belveder. 6,5 kilometer long red path, which starts at the Elbe riverbank opposite to Tourist Information Centre in Hrensko, will go along the road at first, then will turn to forest. You may return to Hrensko following the green path, which in U Suche Kaminice will turn again to red. It’s about 12 kilometer long trek in total.

Belveder is one of the oldest viewing point in Bohemian Switzerland, the huge terrace looks onto Elbe River from 180 meters. In XVIII century the balcony was used for different theatre performance and other events. Nowadays a hotel with restaurant stands there. 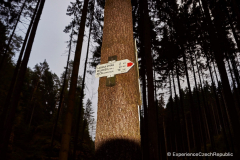 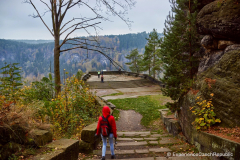